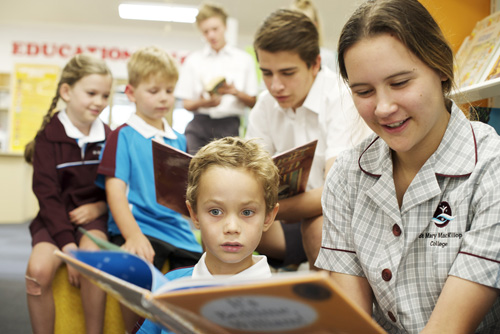 The story of St Mary MacKillop College goes back to 1922, when the Sisters of St Joseph of the Sacred Heart took over a small convent school from the Vasse region.

The first dedicated primary school buildings were officially opened in Busselton in 1954, and the school continued to grow steadily in the parish, moving to its current location in 1987.

In 1994, with strong support from the parish and community, the first Catholic secondary school in the region was built on adjoining land, attracting families from Busselton, Vasse and Dunsborough, as well as Yallingup, Margaret River and Cowaramup, and as far as Capel, Augusta and Nannup. The schools grew and flourished side by side for two decades with a common charism, following the example of Australia’s first saint, Mary MacKillop.

St Joseph’s School and MacKillop Catholic College began the process of amalgamation from 2014, and St Mary MacKillop College opened in 2016 as an outstanding K-12 Catholic College, which has since grown steadily to nearly 1,500 students from Pre Kindy to Year 12.