Cobie welcomed everyone to Mrs Thomas’ Year 1 class Assembly, which began with their production of ‘The Gruffalo’. Mia Mouse went for a stroll through the deep, dark wood where she met a group of Foxes (Cody, Sophie, Jordan and Oliver), followed by a group of Owls (Grace, Sienna, Milla and Autumn), and finally a group of snakes (Eleanor, Montanna, James and Leon). Jake described how all of these animals seemed intent on inviting her for a meal, with Mia Mouse as the main dish! Mia Mouse tells each of them that she is on her way to a feast with a Gruffalo.

Mia Mouse's description of the fierce Gruffalo scares the animals away, and each time she remarks, "Doesn't he know? There's no such thing as a Gruffalo!"

After the Junior Primary Awards, the students from Room 18 sang a song describing the Gruffalo: from the purple prickles on his back, to the poisonous wart on the end of his nose.

Imagine Mouse Ozzy's surprise when the imaginary Gruffalo (played by Khloe), appears right before him in the woods and says, "You'll taste good on a slice of bread!" Clever Mouse Ozzy tricked the Gruffalo to follow him into the deep dark wood to meet the other

characters, who were all so scared of the Gruffalo that they ran from Mouse Ozzy. When the Gruffalo himself runs away, Mouse Ozzy finds a nut and happily eats his lunch in peace.

Jack points out that the moral of the story is quite clear, ‘He who has brains has nothing to fear’.

The third act showcased the children’s Italian skills, with the class singing “The Lion Sleeps Tonight” in Italian. Emerkai played the part of the friendly Lion, while the children sang and played percussion instruments. “We wish to give a special thank you to Señora Pasqualotto, for teaching this song to us.” 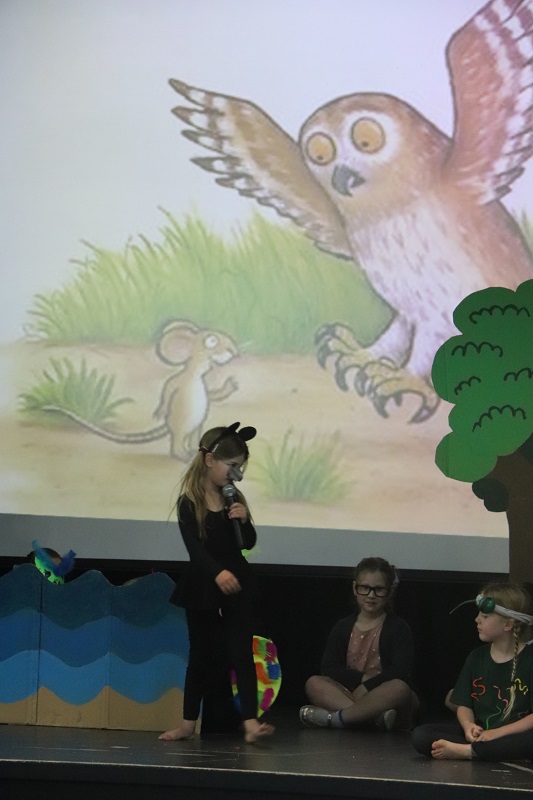 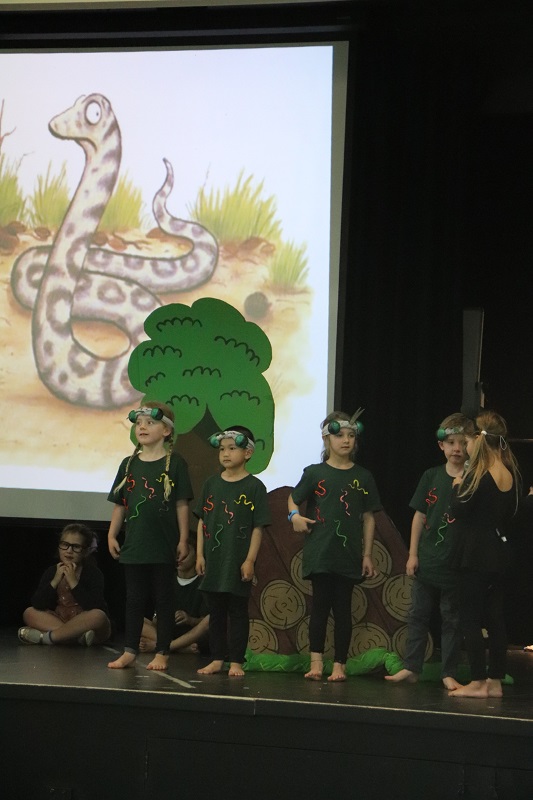 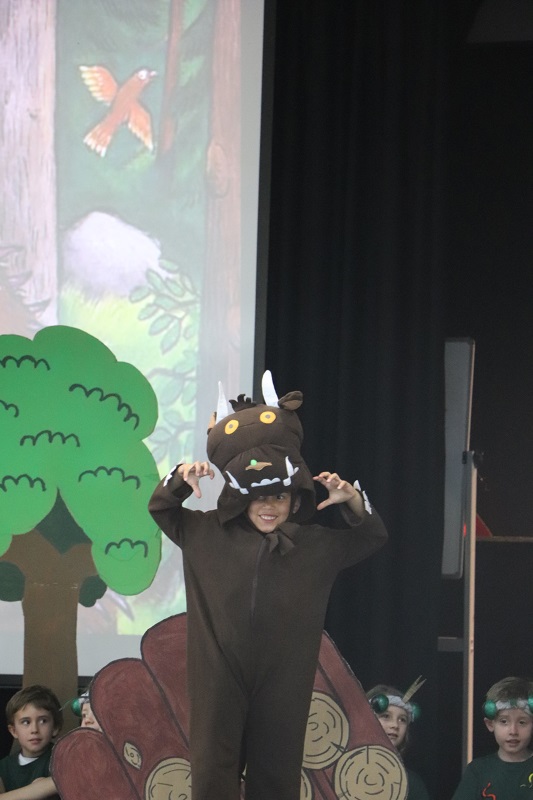 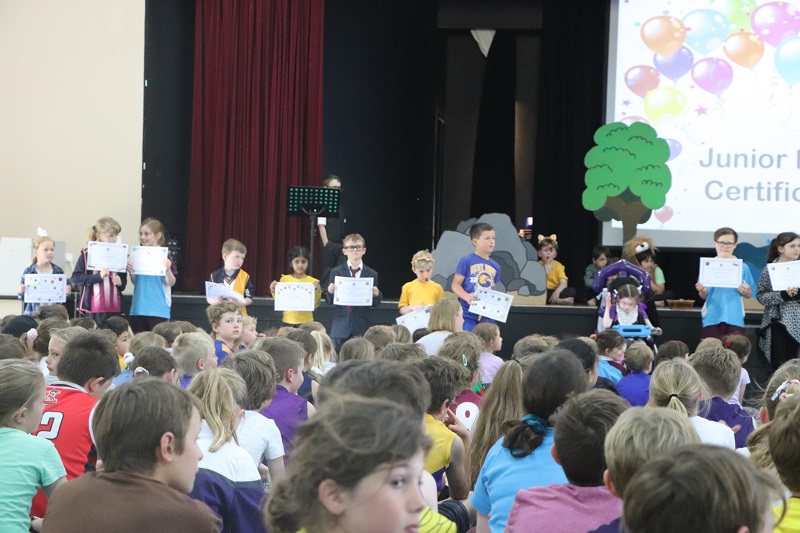 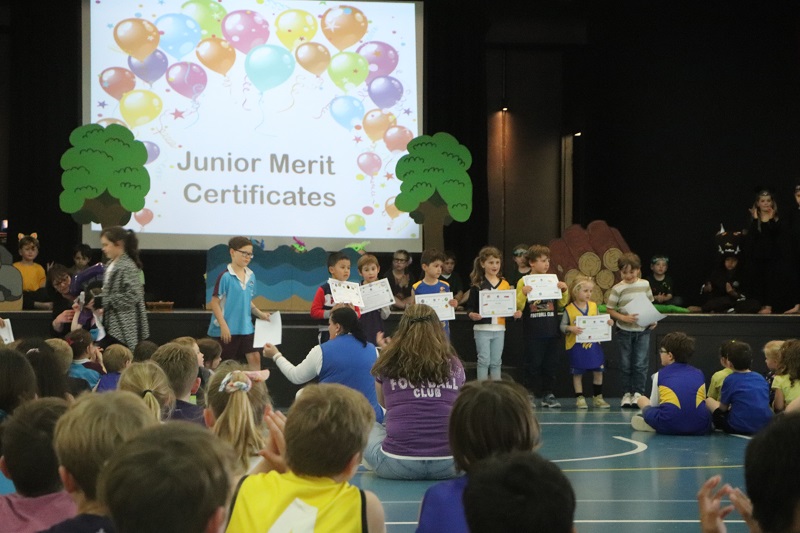 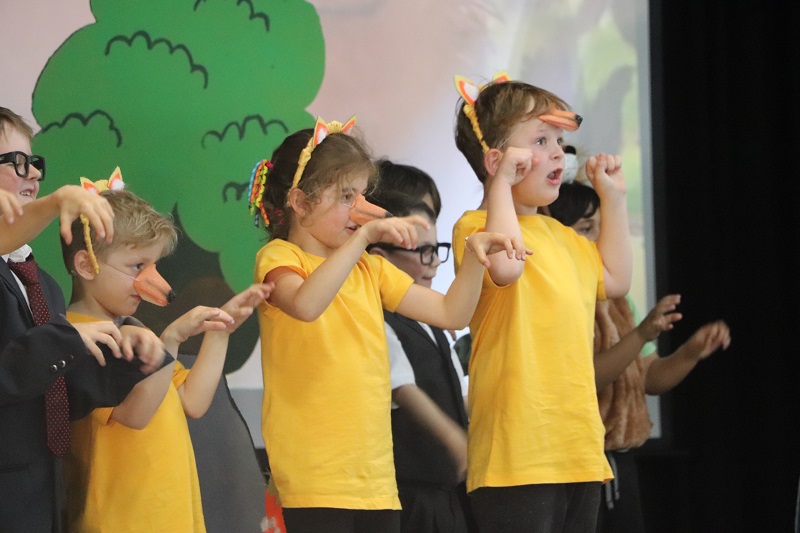 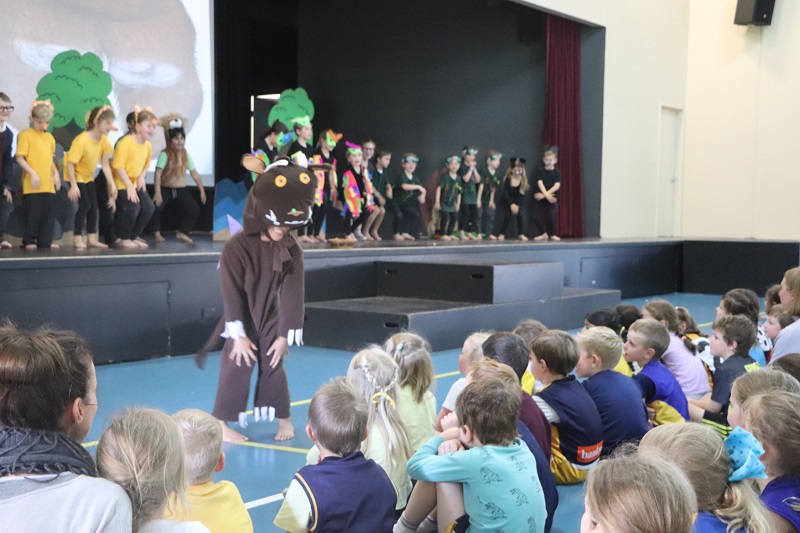 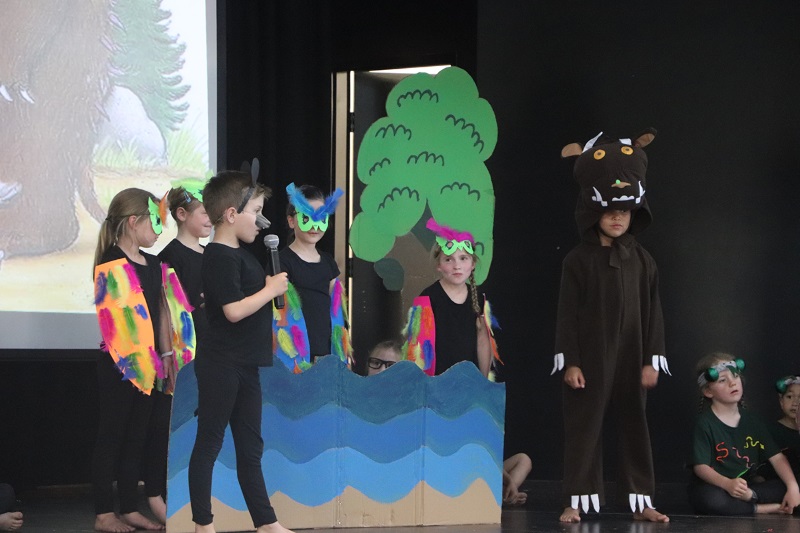 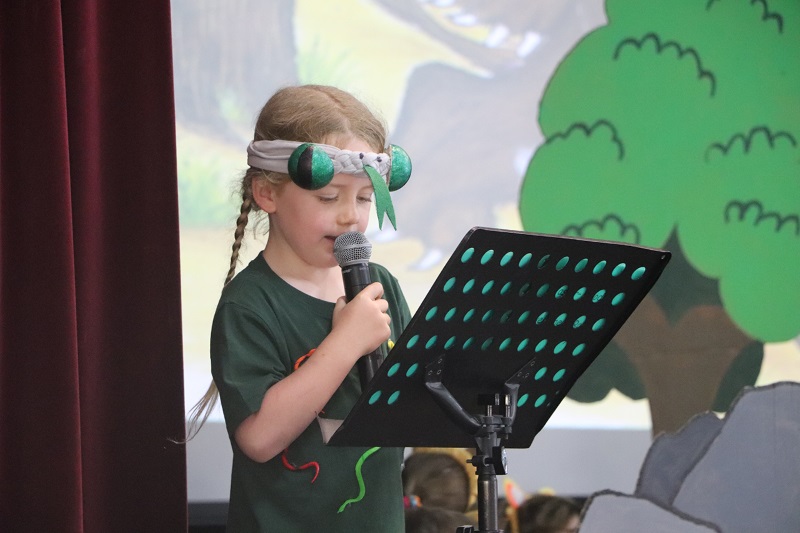 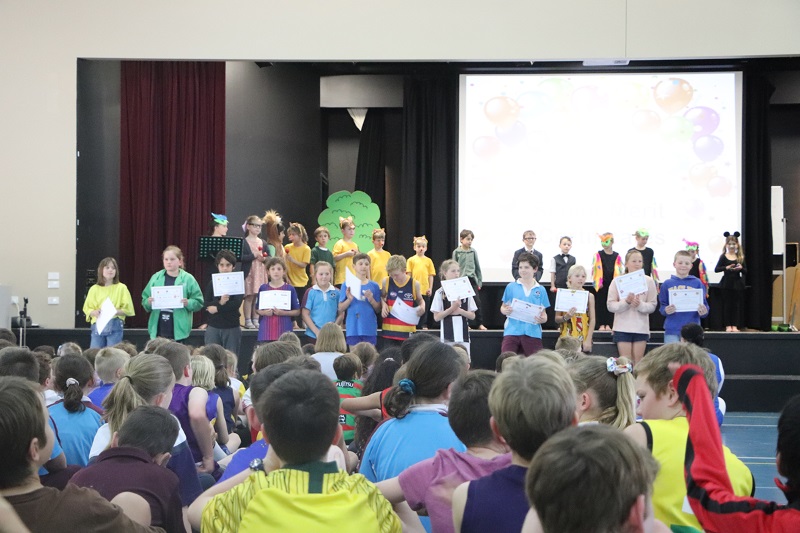 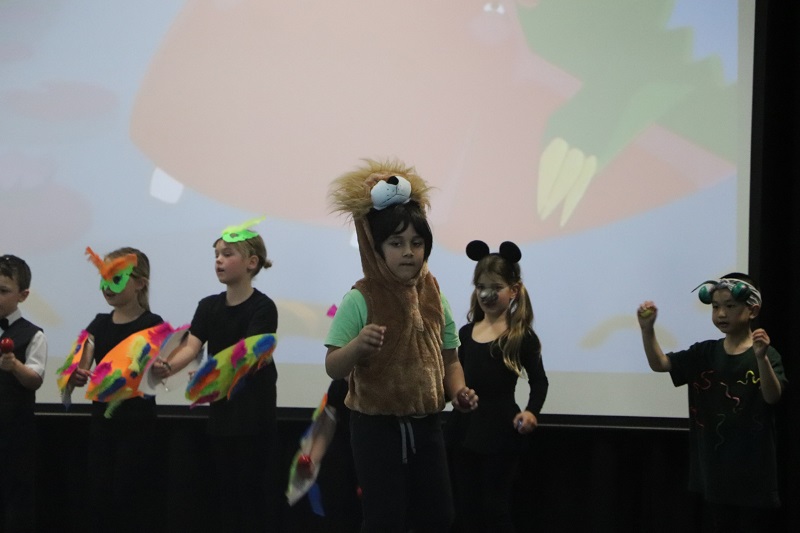 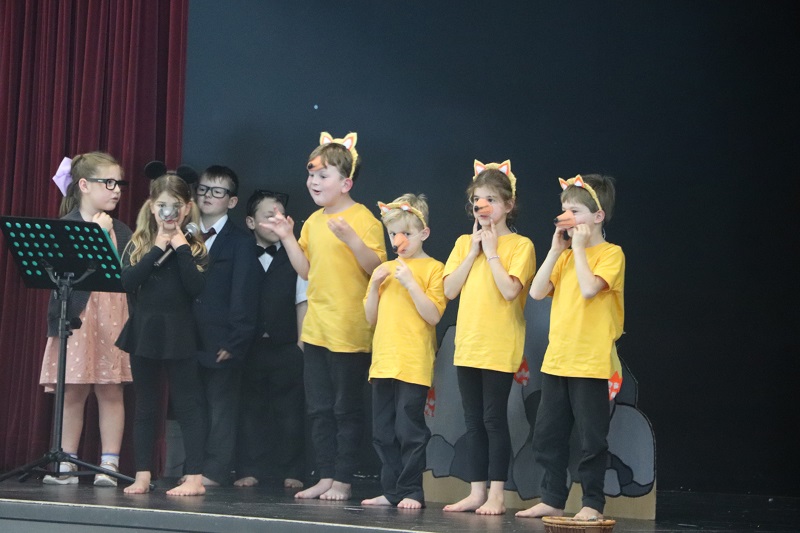 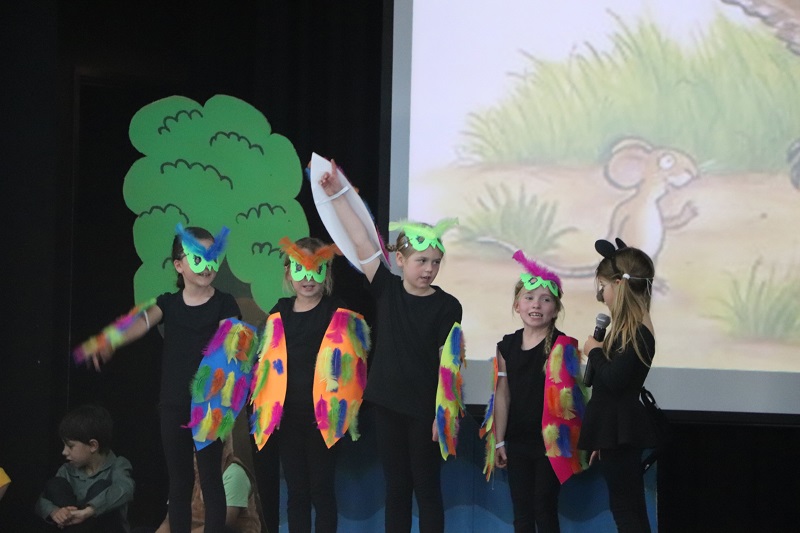